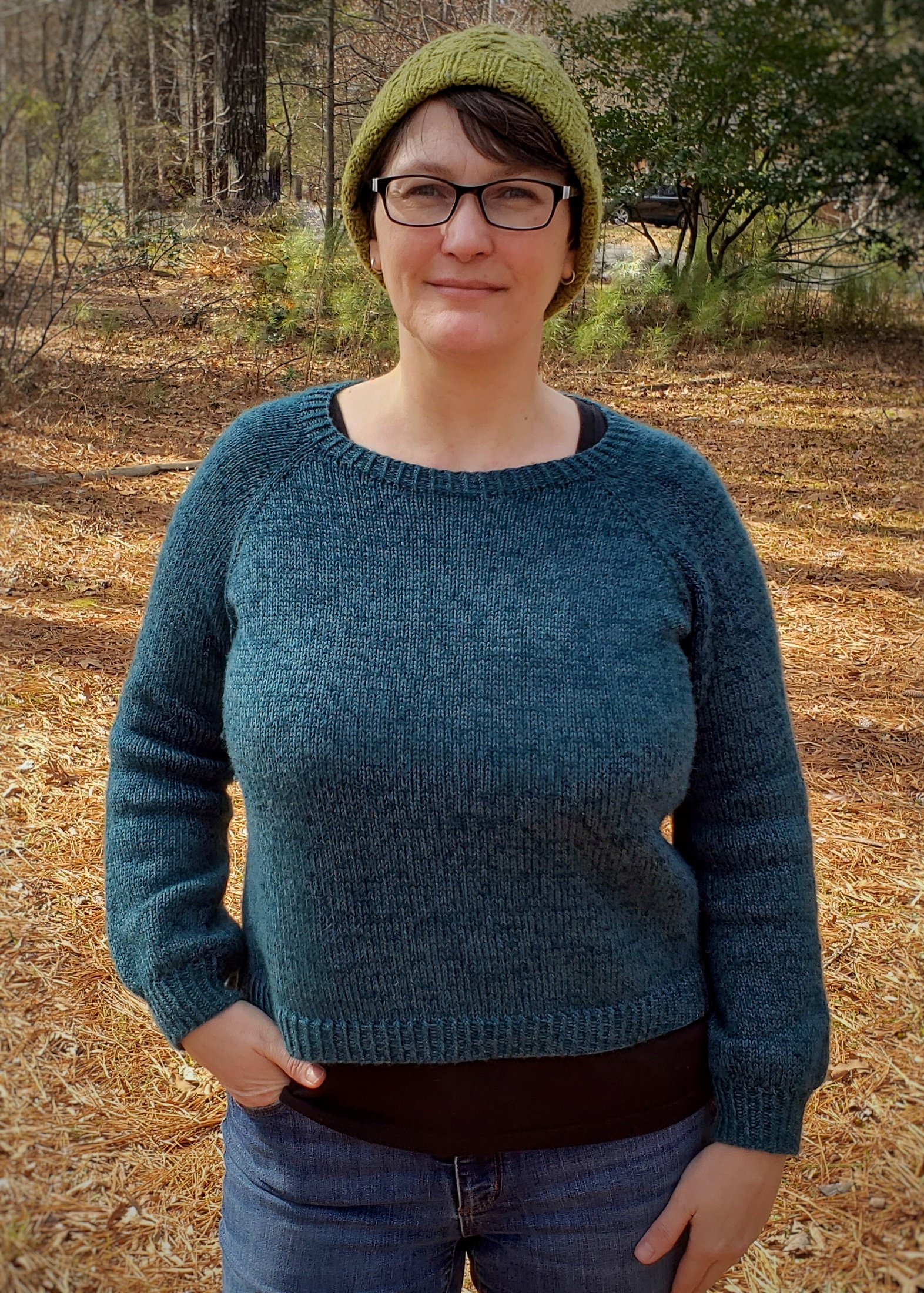 A few months ago I wrote in this post about choosing your sweater size based on your upper chest measurement, and I thought I’d give an example of how I used this method to select my size in another designer’s pattern.

The sweater I’m wearing in this photo is the Gingerbread Sweater from Espace Tricot. It’s a boxy raglan pullover with a suggested ease of 10 inches/ 25.5 cm. My upper chest is around 34 inches; as of this writing my full bust measures 39 inches, a 5-inch difference. The first size listed is a finished chest of 43 inches, which would give me about 9 inches of ease in the upper chest, and 4 inches of ease in the full bust. The next size up is 46.75 inches, which would give me 12.75 inches of ease. Since the first size is closer to the recommended ease, I chose that size. This is also the chest circumference of a favorite boxy top of mine, so I knew I would be happy with that amount of ease. I also compared my upper arm measurement and armhole depth to the schematic to make sure my chosen size would fit in those areas.

The only modification I made, other than adding a bit of length to the body, was to cast on the number of neck stitches for the next size up, and eliminate one increase round for the raglan. I would have been fine with the neck cast on for my size, but I prefer a slightly wider neckline, and I’m very happy with the neckline on the finished sweater.

As you can see in the photo, the sweater fits me perfectly. You’ll notice that it fits similarly to the sweater in the pattern photos. If I had chosen the size that had 10 inches of positive ease in the full bust, I think the sweater would not have fit correctly in the shoulder and neck area, and I know I wouldn’t have been happy with the oversized fit.

Want more tips and tricks? Sign up for my Monthly Musings newsletter. As a thank you, you will receive a free download of my Diagonal Rib Cowl pattern. 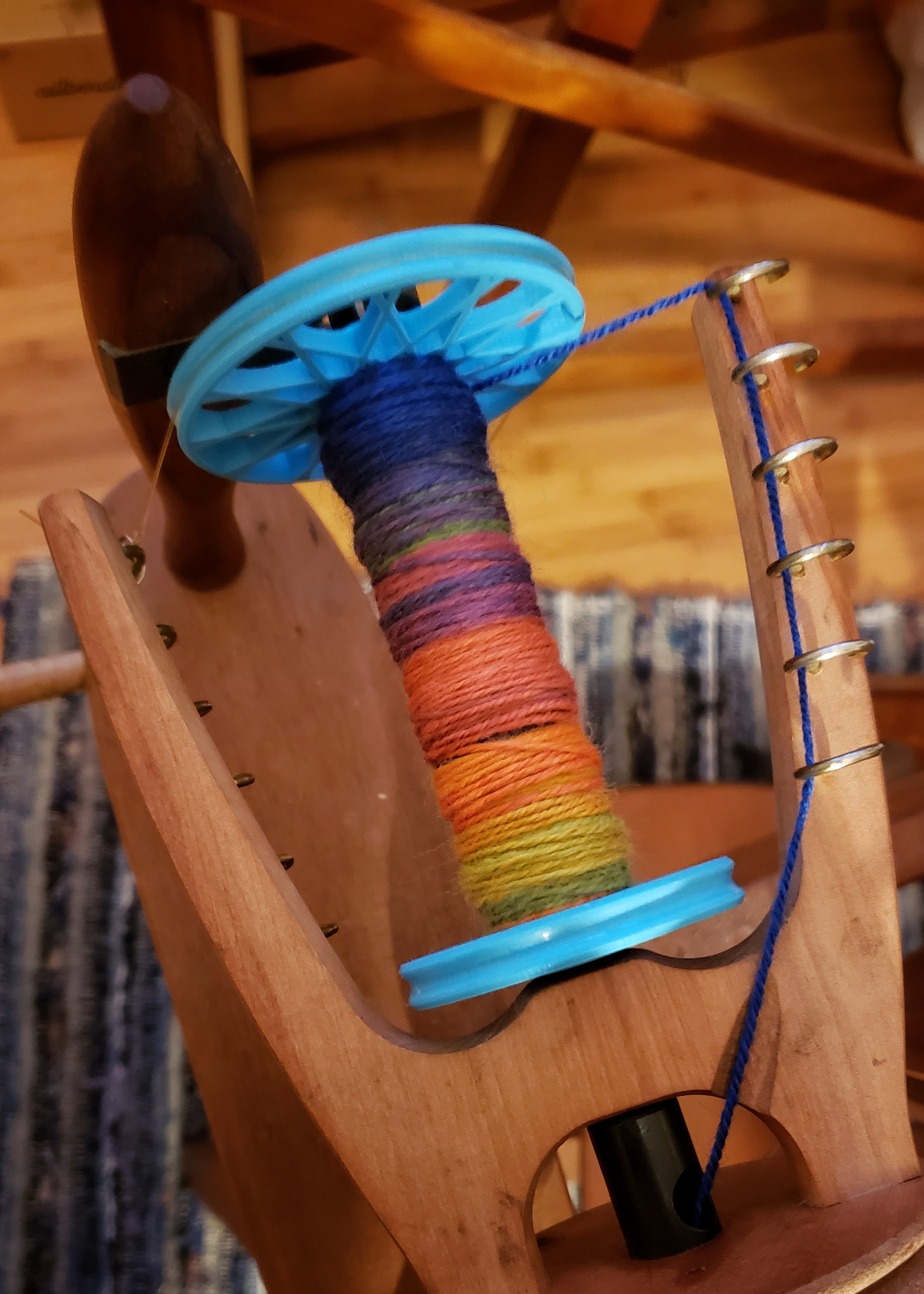 Recently I was chatting with Mary Ann at Three Waters Farm about an issue I consistently have with spinning finer yarn and/ or slippery fibers like her Polwarth/ silk blends. I have a vintage Ashford Traditional wheel, and I often find myself fighting the takeup of the wheel with these fibers. I adjust the brake band tension until there is no tension in the spring at all (and the brake band wants to get caught in the flyer hooks), and still it feels like the takeup is too much. The result is that I have a death grip on the fiber, and my hands tire easily when spinning with short forward draw.

It turns out that part of the problem is that I’ve souped up my wheel too much. I’ve replaced the old flyer (which was missing on this wheel when I bought it from a thrift shop) with a new, multi-whorl flyer and I’m using a new poly drive band. I love the ease of treadling with this new band, but the downside is the issue with fighting the takeup.

Here are some of the tips I’ve found helpful to manage takeup:

Want more tips and tricks? Sign up for my Monthly Musings newsletter. As a thank you, you will receive a free download of my Diagonal Rib Cowl pattern.

I took some time off during the holidays to be with family, and since coming back I’ve been doing the work of closing out 2021 and planning for the upcoming year. In 2021, I published 6 new patterns and 15 blog posts, and taught my first ever online class! Teaching the class on breed-specific yarns was one of the highlights of the year for me, and I hope to do more teaching in the future – maybe even in person.

This year I have some new designs planned, of course, but I am also focusing on updating some old favorites. I’ve mentioned before in my newsletter or on Instagram that I want to update the Suora tee pattern to include larger sizes, and will hopefully be testing and releasing that in the coming months.

I’ve become confident enough in my spinning now to begin designing patterns from my handspun, and my first effort, the Towline Hat, was published as a subscriber exclusive on the Spin Off website just before New Year’s. If you follow me on Instagram you will have seen a teaser there. It’s a cozy, squishy cabled hat knit in woolen-spun 3-ply yarn. (Spin Off subscribers can find the pattern here.) The pattern features Tunis lambswool fiber from Tarheelbilly Farm (she has just updated her shop with both fiber and yarn, so do have a look).

I will be publishing this as a downloadable pattern once this exclusivity period ends, and it will include a commercial yarn version for those who don’t want to spin their own.

If you’d like to be the first to hear about new releases and receive exclusive discounts, sign up for my Monthly Musings newsletter. As a thank you, you will receive a free download of my Diagonal Rib Cowl pattern.

It’s been awhile since I’ve finished a Shave ‘Em to Save ‘Em project – the last few months have been a bit of a whirlwind and haven’t left me much time for spinning. I’ve been working on this lovely natural gray-brown Dorset Horn from Covered Bridge Fiber for several months, and finally finished it off last week.

According to The Fleece and Fiber Sourcebook, Dorset Horn sheep originated in Dorset, a county in southwestern England, and have fleece with a regular, fine crimp with plenty of elascticity. The micron count is typically between 26 and 33, which puts them in the medium wool range. The Livestock Breed Conservancy lists the breed as Threatened; you can find a fiber profile on the Conservancy’s website. They are usually white but can occasionally be near-black in color. Lucky me to have found this gorgeous shade of fiber!

After spindle spinning just under an ounce of the fiber for my blanket project, I set up to spin the fiber on my wheel. While Dorset Horn not a Down breed, this fiber did have a bit of that spongy feel that’s characteristic of the Down breeds, so I assumed this fiber would be amenable to spinning londraw. I had visions of a hat or mittens in a lofty thicker yarn.

I started spinning the singles at a 12:1 ratio with about a 2-inch draft. But I found I wasn’t enjoying this project over the long haul, and about 3/4 of the way through I gave long-draw another go. This time I was able to spin fine enough to match the singles I already had, so I went with it and finished the bobbin that way. Needless to say, this spin isn’t going to win any consistency awards, but I’m satisfied with the end result. Oddly enough, the skein spun completely with a worsted draft seems to have fluffed up more after finishing than the skein where I switched to long-draw halfway through. Go figure.

The resulting yarn is pleasantly soft, if not next-to-skin soft. I could see buying a sweater’s worth of this fiber and spinning it for a fingering-weight sweater.

Subscribe to my Monthly Musings newsletter and receive a free cowl pattern! When you subscribe you will receive a free download of my Diagonal Rib Cowl. You’ll also be the first to hear about new releases and other fiber-related news. 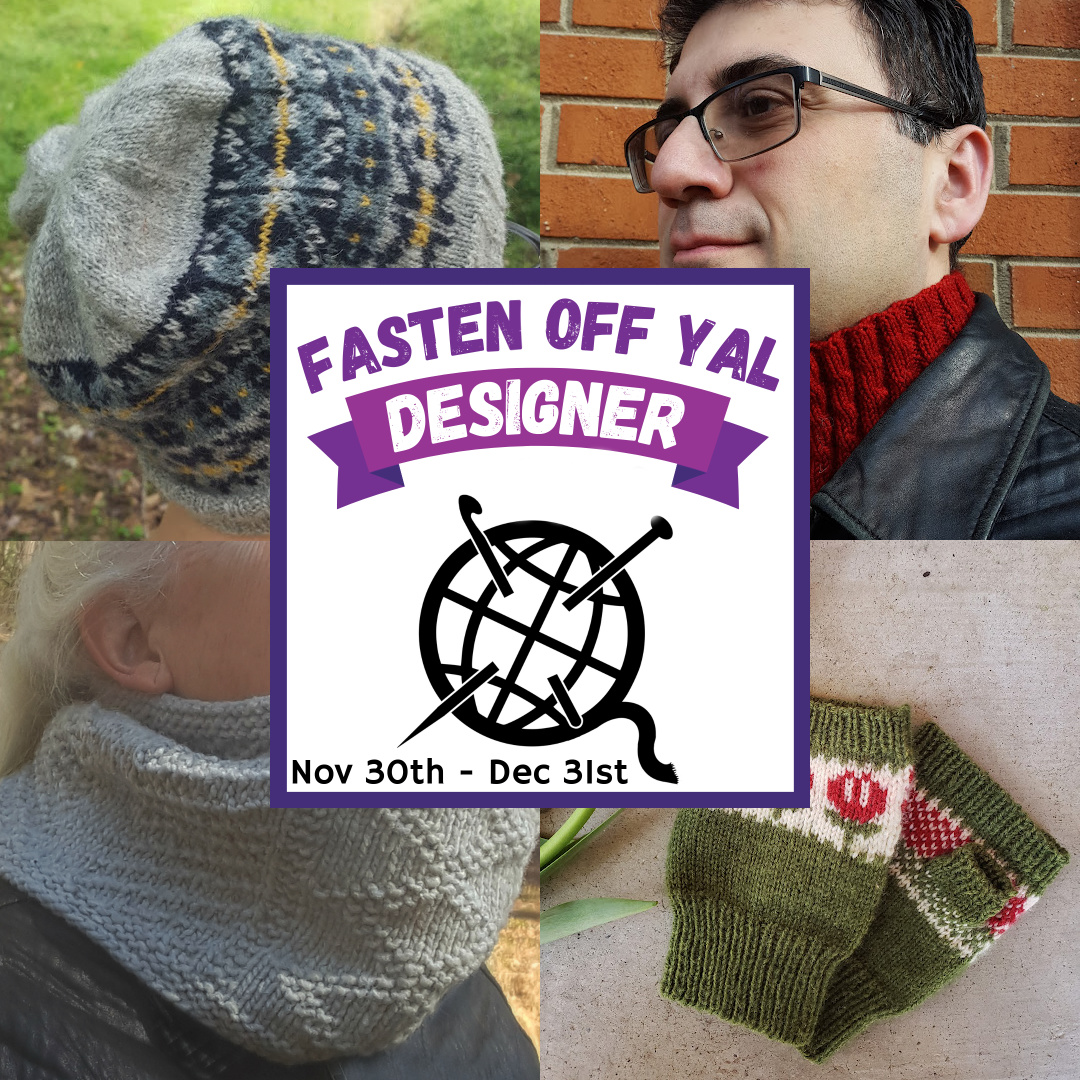 As the holidays approach, holiday sales are something everyone looks forward to. I will not be holding a Black Friday sale – the ethos of Black Friday doesn’t fit with my values as a business around sustainability. I don’t want you to buy my patterns just because they’re on sale. However, I will be participating in the Fasten Off Yarnalong again this year.

The yarnalong runs from November 30th through December 31st. It will take place entirely off Ravelry, as Ravelry has still not fully fixed their accessibility issues and doesn’t seem to have any intention of doing so. There are several ways to participate – you can join the Discord server for the event, or participate on Instagram or Twitter using the hashtag #FastenOffYAL. You can find all the details on the Fasten Off website.

As part of the event all individual patterns in my shop are 25% off with code FO2021 from November 30th – December 6th. The code is good for my patterns on Payhip, Etsy, and yes, Ravelry – I don’t want to penalize anyone for using Ravelry, but I also want to support an event in which everyone can participate.

A word on accessibilty of my patterns:

While I don’t yet offer screen reader or low vision accessible versions of my patterns, I have been working to make my patterns more accessible. My new patterns going forward use symbols or grayscale in charts for color blind accessibility, include both charts and written instructions in most cases, and limit the use of abbreviations. If you have any questions about my patterns, please reach out using the contact form or email me at kerry@bullockozkandesigns.com.

Subscribe to my Monthly Musings newsletter and receive a free cowl pattern! When you subscribe you will receive a free download of my Diagonal Rib Cowl. You’ll also be the first to hear about new releases and other fiber-related news.